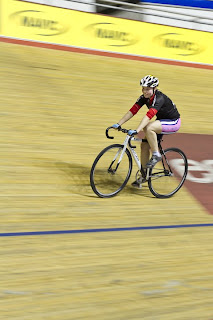 Last night Sheffield Uni Cycling Club went to the Velodrome in Manchester - good choice given the ice rink that is Sheffield at the moment!
My friend Helen has been telling me to try track racing for a while, so was good to have a try at riding a track first! The first couple of laps were a little scary, especially getting used to the concept of not turning the handlebars yet going round in a circle!

Once I was sure my bike was staying on track on the bends it was a matter of building up and eventually riding around the top of the bends and dropping down for max acceleration. It was awesome fun and I can't wait to go back! :-)
Posted by Lucy at 15:21 No comments: 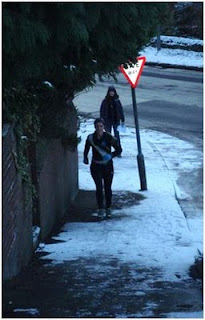 Welcome to my new blog. Here you will find all my racing on the fells, Mountain Bike Orienteering (MTBO) and adventure racing with Team Accelerate. So....

My last bit of running wasn't in fact a race but as part of a team of Sheffield University Orienteers (ShUOC) in our attempt to run the height of Everest up 'heroes' hill in Sheffield, a 1.2km hill with 130m climb. We were raising money for the Mountain Rescue and Young Persons Cancer Charity at the Royal Hallamshire Hospital, you can find our just giving page here - www.justgiving.com/shuoc. I forgot how big a hill it is so it was a nice reintroduction to running hard after a bit of a rest period. By the time I completed my 2 reps we were 3/4 of the way up and the height was reached in around 9hours.
Thankfully it was only a light dusting of snow last Saturday making it slightly more realistic, as by Tuesday morning Sheffield was coated in snow which would have made it an entirely different challenge! This brought an end to the 'gentle reintroduction to training' as it was far too exciting so I went out to play and did an intervals session with ShUOC followed by a nice run up porter brook. And of course when Laura text me on Wednesday to see if I wanted a run I was out the door again! We went for a very pretty if not tough run (snow up to mid thigh in places) around Rivelin and over Hallamshire golf course.

Annoyingly, for the first time ever my asthma has had some real problems with cold air (not just minor ones) - so now I have to take bonus drugs and not go fell running for a bit....I took this to mean just running....as I might have been out to the peaks with some friends for a walk in waist deep snow this afternoon, but I think a few days rest would probably be good idea as it wasn't particularly easy! Having said that it was great fun and included the making of a snow cave and finding the biggest icicle I have ever seen!