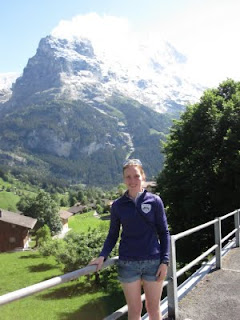 (Me with the Eiger)
On Saturday 21st May I flew out to Switzerland with John Cunningham, Alasdair Bruce and Stuart Walker to race at the first edition of the alpine expedition race (APEX). The base of the race was Interlaken, from which we could get a good view of the Jungfrau, and what we were in for over the 4 day non stop XPD race!

It wasn't until the Tuesday that we got the race maps, so we spent a few days organizing kit and speculating with the information we already had about the course. When we finally saw the route it was very exciting!

The course started with a 10km run through Interlaken to the Brienzesee lake where there was a 30km paddle. Out of the kayak and onto the bikes, the route then went into the hills and to Kandersteg for a short trek, before hitting the climbs (and descents!) on the bike to take us over to Lauterbrunnen for stage 3, a proper mountain trek up the Schilthorn from just over 700m to just under 3000m! With a few more controls bagged on the trek the route then went over the Eiger Traverse on the bike.

Next came a trek with some canyoning, followed by more trekking back down to the other side of the lake, a 25km paddle down the lake and finally another trek (and paraglide if you timed it right) back to Interlaken.
Before any of that however, there was the prologue to deal with. 4 activities, 1 trotti biking, 2 treks and some rafting with restarts for each section every 90minutes. Our aim for this part of the race was to be within 45min-1hr of the leading team overall.
We started with trotti biking and it was clear fairly quickly this wasn't our finest discipline....We finished about 7mins down on the Scandi team who most certainly knew what a trotti bike was before they turned up!

Next came the shorter of the 2 treks which we hit hard! It was over 30degrees by this point and we hammered it round, I don't think we lost too much time to any teams on this one! A short sit in the shade and it was out on to the longer trek. This is where the heat really started to tell. By the end we had had another good section but I was verging on heat exhaustion and desperately needed to sit in the shade....but no time, it was rafting next, so instead I put a wetsuit on. I didn't come back to life until the first wave hit my face but from there on it was great fun, paddling well as a team to overtake the other 2 rafts going down at the same time :-).
Overall we had smashed the target, finishing 32mins down on the leaders. 40minutes after finishing the prologue, we started the main race! The run over to the lake was uneventful and a much more steady pace (phew) although I think Stu was feeling having raced in the heat at this point. In the kayak it was me feeling the exertions of the prologue, every hr to hr and a half I felt terrible, but then within 10-15mins was fine again. One thing I was glad of was that, with plenty of strapping and a tiny feathering of my paddle, I got through relatively unscathed! Arm intact!
Onto the bikes and I felt really good going up the first hill, good to get the legs moving again! We flew down to the valley on the far side (here I was finding it hard to stay awake when peddling wasn't required) and started the undulating riding along the valley. This is where things went wrong. John stopped suddenly with a pain in his hamstring. We had a rest, debated what to do and had John on Als Tow for another 3.5km before coming to the start of the climb proper. Here we happened across another team, one of which was a physio. As John couldn't stand, walk or pedal without great discomfort it was apparent he was going to have to stop. We called for a van and set the tent up to wait. It wasn't quite cold enough to fit the 4 of us into the 2man tent :-).

Whilst waiting team Quechua came past, I had to confirm this wasn't an early sleepmonster as they had been 4th when we were paddling! Then we realised there was only 3 of them left as well.
A couple of hours later we were off again as a 3. It was a loooooong climb and by the top we were cutting it fine to do the trek and get back over the hills on the bike to the Schilthorn trek in time for the 14:00 cut off. As I was also finding it hard to keep my eyes open even now it was light, we put the tent up again and slept for 40mins. It made the world of difference! I think I still hadn't recovered from the 2nd trek in the prologue until this point!
We then took an ad hoc route, via Interlaken to see JC had clothes and food etc, round to the Schilthorn!

Here 3 became 2 as Al decided he would protect a slightly dodgy ankle. So me and Stu set off just before 2pm. What a trek! We took it steady, stopping for photos, food and to shelter from the random hail thunderstorm that happened 2/3rds of the way up. We had timed it perfectly, getting to the control below the summit (at a closed restaurant) as the hail started, so we stayed dry! We made it to the top in 6hrs 44, the 10th fastest time which we were more than happy with...
At the top it was beautiful sunshine once again, complete with rainbows. Great views of the Eiger and Jungfrau!
We had 30mins to decide whether the carry on before they stopped allowing people across the traverse to the next control. This was quite an easy decision as we hadn't intended to be out at night for any length of time at 3000m so hadn't taken as much kit as was needed. We slept for a couple of hours at the James Bond restaurant before getting the telecabin down again - well it wasn't like we were even vaguely in the race anymore, having missed controls on the bike, and the previous trek!

In the telecabin we came across Irish AR and Team sleepmonsters/likeys.com who were down to 3. It was decided on the stroll back to transition that Stu should carry on with them as a 4 as continuing any further would mean I had to do the final paddle, and my wrist wasn't perfect. So I waved them off on the bike and went to bed, end of the race for me.

Stu and Team sleepmonsters/likeys.com (can you have a shorter name next time please :-P) continued and were looking good, if not a little tired after the bike, canyoning, trek and paddle. They made it most of the way round the final trek before Gary got hypothermic and was helecoptered off. They arrived back having done all but the last few Km of the course! Irish AR came over the finish line around midday Sunday as a 2! It was straight into the hot tub from there! 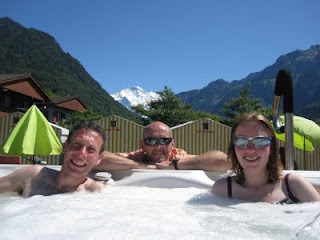 So, whilst the race didn't go anyway near plan, I learnt a lot from the part I did and will be back next year to finish it! Thanks to Staffan and co for putting on a fantastic race in a stunning area!
Posted by Lucy at 10:14 No comments: