8 weeks on from demolishing my ankle and everything was good to go for the Open Adventure C2C, not that I could quite believe it. After 2 weeks of non weight bearing I was let loose on a bike and had been clocking up the miles on holiday in the Alps. Once back in the peaks, I added aqua jogging to the agenda and 6 weeks on I was out running again (albeit a bit carefully). After a week or so of build up I knew the C2C was possible without damaging anything, especailly if I took the downhills steady. The uphill felt abdolutely fine, like my ankle was 100% so my plan was to paddle, bike and run uphill hard and hope this would keep me in contention after I'd jogged the downhills.

The C2C is a great event, starting in Whitehaven on the west coast and heading to Robin Hood's Bay on the east coast with competitors crossing the country on foot, mountain bikes and in kayaks.

The first day takes you from Whitehaven to Keswick via St Bees, Crummock Water, Buttermere, Robinson and Derwentwater. The second day, from Keswick to Kirby Stephen, takes in Thirlmere, Helvellyn and Ullswater along the way. The third day crosses the Yorkshrie Dales, over Nine Standards, through Swaledale and over to Castle Bolton before hitting the road to Northallerton. To finish, the route goes from Northallerton, up Clay Bank and over the North York Moors to Whitby with a final run along the coast into Robin Hoods Bay.

Day one was always going to be my weak point, greatest amount of water based sport vs land based sport. As it turned out, it was weaker than planned after I turned the sea kayak into a swim one too many times....so 120% of the slowest time by way of penalty for being rescued within sight of the beach at St Bees and I was off on the bike - this was more like it. My legs felt like they were a bit lacking but got me over to Crummock Water alright where it was back into the boat. This time, despite it being a bit blustery, I remained in the boat! The killer on this leg is a portage between Crummock and Buttermere. Here I learned my second mistake, it turns out 1km+ is too far for me to carry 1/3 of my own body weight. I'd shot myself in the foot, taking a heavier boat I was more confident of paddling on the sea, then taking 120% of the slowest time anyway and having to cart its extra 5-6kg weight (compared to the alternative) over the portage. Ah well, it was only day 1! I'd been out what felt like an age by the time I set off up Robinson so, after 1km or so of warming the ankle up and eating a banana I instigated the plan of running fast uphill, taking queen of the mountains for day 1 in 43:37. My legs were feeling ok so the pace felt good and I cruised over to Dale head before following the plan again and jog/walking down it. Heading up High Spy I started to feel a bit rough but kept a reasonable pace over to catbells before the slowest descent I think I'd ever managed down to Nicol End - my support crew should be proud (they didn't stop telling me to be careful). The swim across to Keswick went more smoothly than 2009, then it was just a short trot over to moot hall. On the last run feeling rough most definitely turning into feeling sick.

So, my weakest day complete I was raring to go on day 2, the only way was up! Setting off early due to my long first day, I rode over to Thirlmere, legs feeling fairly empty but still arriving a bit too close to my support crew.I put this down to the early morning and had a good paddle down to the second transition, however undid all this good work carrying my boat up the transition (portages over!). I set off up Helvellyn but immediately knew there was something definitely wrong, I was feeling sick again.


I tried eating as that normally fixes things. This time it didn't...and I knew this wasn't your normal working too hard kind of sick. I'd had a stomach bug the previous weekend and clearly was not over it. Approaching the top I almost turned around, but somehow staggered my way over Helvellyn and down to Patterdale, feeling awful by the time I hit swirral edge and giving in to a walk shorly after hole in the wall. In Patterdale, smooth transitions were over for the day and I sat, trying to drink and eat something. Kirby Stephen couldn't come soon enough, but there was still 4hrs of kayaking and biking to go. I finished just after Helen who had had a bad crash coming into Kirby Stephen. Not that that stopped her smiling (well, not yet anyway). 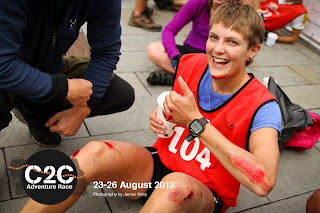 After force feeding myself a meal over about 3hrs I went to bed still feeling awful, hopeful that a good nights sleep would sort me out. I almost didn't start day 3 when I woke up and found out it hadn't. But I got myself on the move, up Nine Standards. I made a mistake here, not adding extra strapping to my ankle for the rough ground, so was reduced to a jog/ walk for a large portion of the way. Like 2009 the clag was down so I am still yet to see the view from the top!


Once onto the bike through swaledale I started to enjoy myself a bit as there are some awesome off road descents to be had around there and I'd resigned myself to a steady day out. This meant a lot of people came past on the road from Castle Bolton and at one point I realised I'd really let my mind wander and was putting almost 0 effort in, as Alan Hartley came whizzing by looking a bit bemused at my pace. The slow and steady pace started to pay off in the last mile or so into Northallerton though and I actually could stomach food after the finish!

Setting off early on the last day was stunning. The mist was down but lifted as I biked and started the run up Carlton Bank. By the top the view was beautiful and to top it off I'd actually been able to run up it! I'd held back a bit, not wanting to push it too far, but all seemed well and the run along to the second transition was stunning.

I was pleased to feel good on the bike as well. Whilst I was still struggling to eat, I could at least get something in and I made good progress over to Glaisdale, only hindered by my chain hopping down the back of my cassette a couple of times, jamming well and truly and taking a bit of faff to get sorted each time. I attacked the climb out of Glaisdale (boy is it steep!) and suddenly felt my chain pull. I hopped off and ran to the top before sorting it out. A link had almost snapped so I delved into my bike kit for my spare link.....it wasn't there! Thankfully I managed to get the bent link back into working order and pedalled very carefully over to Whitby, trying to minimize gear changes and keep the strain off the chain as much as possible. It made it!
Onto the final run and I was still feeling alright so ran into Robin Hoods Bay, overtaking the last few people to have started before me that day, only one team made it there still ahead.

So, not entirely to plan but I made it across the country and my ankle is still intact! Thanks to James, Nicki and the open adventure volunteers for a great event, and my super support crew, Cath and Harriet, who I threw in the deep end.