The run up to the APEX...Fell racing wins and MTBO selections 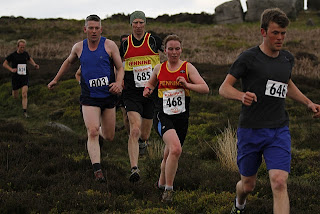 Over the last 5-6weeks I have had one main target, get the use of my right wrist back. After kayaking a couple of times in training I ended up with tendonitis which has ruled out biking and kayaking...and typing on a computer, spreading butter on toast and many other things that used to take a lot less time to do!

Training wise it was down to running! So after the British Champs race in Ireland, an attempt at the Kinder Dozen with the APEX team followed the weekend after. We set off a little late and so completed 8/12ths of a kinder dozen, getting in a good 2000m climb around kinder - the Swiss alps are going to be big! I will be back to complete that at some time, so much of it is through proper terrain it's a good tough training session!
Herod Farm fell race came next where I went eyeballs out from the start thinking there was somebody in the race I recognized as rapid! The three mile race has a fair bit of climb which slightly counteracted my lack of short running recently and I finished 1st Lady by nearly 3minutes, with a PB by a minute! It turns out it wasn't who I thought I had spotted at the start...

The weekend after I was back in Ireland for the JK orienteering festival. With a highly competitive elite field on the W21E this year I was very pleased to finish 20th overall. I surprised myself with 19th in the sprint as my legs felt like dead weights, an ok middle race on sand dunes and I finished 28th, then I was 20th on the open fell long course on the final day of individual racing. This was sooooo much better than last years 2nd and 3rd to last in the middle and long (after which I gave up orienteering officially...).
To finish the weekend off I had the race of my life in the womens premier relay, back on the sand dunes area from the 2nd day. I came back in a pack in 6th position, ahead of many people I've never even got close to beating before! Anwen came back in 5th after having pulled up to 3rd at one point, then after Laura came through spectator neck and neck with 3rd it was a tense wait. This time it was a bit much to ask, 25seconds to be precise and we came 4th, missing out on that podium spot...

Last weekend was the MTBO world championship selection races and British Middle and Sprint. Sadly I headed down to Cannock without a bike as I still couldn't ride. I ran the sprint on the Sunday and discovered that running is faster than biking.....until the straight line undergrowth becomes too brambly and thick to battle through....I finished 7th on foot :-)
Today the selections are out and I am off to Italy in August :-)
This week I ran burbage skyline fell race, my favorite evening local race! By -Higger Tor I was really feeling the bad left over side effects of having been on diclofenac to reduce the inflammation in my arm. I almost cut straight back to the finish, then somebody shouted '2nd lady' so I had to carry on really. I finished 2nd and missed a PB by 15seconds which, considering how much easier this felt than last year I am very happy with.

A strategy meeting last night highlighted the to do list before we fly to Switzerland next weekend, so this weekend is last min shopping and bike packing...Oh and the ShUOC ladies relay team are out in force at the British Orienteering Relays this Sunday, on home ground! Watch this space :-)
Posted by Lucy at 12:21 No comments: