After the last blog post, as I'm sure most of you are aware, IT SNOWED! And in Crookes (where I live) it snowed loads!


So it was a good decision to evacuate Sheffield at 7am on the Friday as my road was still passable (just). 2.5hrs later I'd made it to New Mills (50min journey) and after spending the day at home, headed to Kendal where everyone was wondering what all the fuss was about - barely any snow in sight!
On Sat morning I recieved a text to say the Edale Skyline had been cancelled - and with good reason, a couple of rather fast ladies went out to give it a bash anyway and took 2.5hrs to do about 1/4 of the route...never mind the announcement I heard at the train station on Sat night about the train to Edale (the only form of transport to Edale bar owning a tractor with a snow plough attached) being delayed by 29minutes.

There was slightly less snow in Grizedale however (although its all relative...) which is where I was racing the  Cumbrian Commotion Trail Plus with Bruce and Campbell. This was an adventure race without any nav to hide behind - so perfect if you're looking to give it a go. It started with a short run to split everyone up before an mtb - run- kayak - run.
The pace was a bit fierce for the first run but settled down on the bike. The MTB route had been amended so that it was practically all on fire roads, however this took nothing away from the fun of it as it was a skill just to ride those in all the snow! Sliding all over the place, it was some of the best fun I've had on a bike. By the end of the mtb we were in the lead so headed over the hill for a quick kayak keeping the effort up through deep snow..The woods were a proper winter wonderland, all very pretty. As we headed back up the hill from the kayak, we passed those on their way to the boats who were very encouraging, many of them yelling 'go on lads, well done'.....

It felt a bit like falling down the hill to the finish as my legs had gone numb by that point, but after a quick bit of plank skiing and a hop over a slippy barrier we crossed the line still in first :-).
I had a few more snowy adventures with the general theme of going for a ride as though there was no snow and being surprised that it took twice as long. Bakewell had plenty of 'rideable' snow, which made your thighs burn, however cut gate was....well... a cornice! I was so excited to find a bit of non snowy ground on this particular outing that I flew down the hill only to attempt a superman impression over the front of my handlebars...oops.  All of it was in stunning sunshine and definitely a lot of fun. 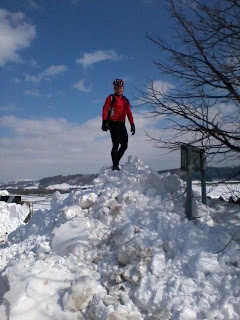 It was a novelty to ride not in the snow this weekend at the Open 5. I was racing with Rosemary whom I met up with on the Sat evening after a paddle on the beautifully still Derwent Water. I knew Rosemary was good at organising, but I didn't realise this organisation started on the Sat :-P....thats a lot of planning!
So whilst Rosemary sorted, I emptied everything warm I had with me into the camping hut and wrapped up. I'd never been in a camping hut before, the heater was certainly welcome!

I'd fallen into the trap of 'fixing' my gears on Fri night....at 10pm...so it wasn't a great surprise that, whilst they had been working when I left the house, they no longer shifted up on Sunday morning....thankfully Jon fixed that quickly, thanks Jon!

We opted to run first, even though the bike looked pretty commiting, so off we went, up, up, up towards Grizedale Pike! I couldn't believe it, I was overheating, now thats not something that's happened recently! Somewhere along the way it became obvious that if we went for one of the 2 controls that would have meant climbing an extra 200m, we would not be back in 2hrs. It wouldn't be much over, but if we wanted a good bike, we probably needed the full 3hours. So we binned the plan of running high and arrived back in transition after only 1hr 40.

We headed out on an anticlockwise loop on the bike, choosing to miss control 10 early on. It was clear from the off there were some big climbs to be had, however it wasn't until the 10km+ of solid uphill back to whinlatter that my legs started to fall off. It felt like the whole course had been one long climb up to this point and I wanted some downhill. A hand full of haribo and a gel sorted me out a bit, as did our arrival at the red route! I love a bit of singletrack, by the time we'd cleared Whinlatter of controls I'd forgiven Ant for the looooooong climb to get there! I think this has overtaken Warcop as my all time favourite open 5!


We swooped down to the finish a whole 7mins early (don't know what has got into us these last two events) with a score of 545, enough to win :-).

I think our strengths are starting to rub off on each other as we are certainly a lot more evenly matched than we were at the start of the series. On the runnable fire roads up through the forest, Rosemary was right on my heels (I was certainly aware of this given the accidentally large interval track session I'd ruined my legs with) and on the bike I felt I wasn't holding her up quite as much....especially towards the end in Whinlatter (although I still think this would be a different matter if there were large road sections!). One more open 5 to go at in Shropshire in May! Can't wait :-)
Posted by Lucy at 15:08 1 comment: