Over new year we were up in Scotland, running, skiing and ice climbing (indoors thanks to 100mph gusting wind). I then had another crack at the open 5 with Rosemary at the start of January (http://planetbyde.com/2013/01/07/haglofs-open-5-north-york-moors/) and last week we had an ace long weekend running in the Lakes. What a bonus, it even snowed for us! Without a blink, the first thought when we saw the snow falling was, woohoo, massive snowy run! 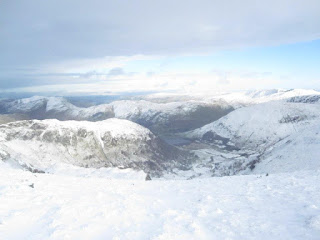 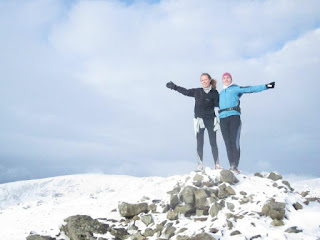 This is how we enjoy the mountains and it's how Rachel Majumdar and Tom Chesters were enjoying them in Glencoe last weekend when they were descending Bidean nam Bian, in the wrong place at the wrong time. My thoughts are with their families and friends, they'll be missed by so many! I know I'll be missing Rachel's  ready smile, I'll remember her as one of the kindest and most encouraging people I had the pleasure to call my friend. As it happens, I never got to meet Tom. He was working on a PhD similar to mine in Hull. He tracked me down online (ah, what a small world orienteering is) and we chatted by email, sharing stories of weekend adventures (I mean, discussing the intricacies of osteoporosis and bone biomechanics), planning to meet up the next time he was in Sheffield visiting the gait lab we were both using.

As fellow blogger whereverthepathmaylead put it:
'These events demonstrate the fine line we tread when we pursue the activities we do. Everyone was adequately equipped and suitably experienced. Through no “fault” of their own, they’ve ended up in dangerous situations. And the fact is, as fellrunners and mountaineers, it could be any one of us at any time. Does that mean we don’t do it anymore and we find more sedate activities? No, of course it doesn’t since, as well as being an ever-present danger, it’s also one of the attractions to what we do'

Happy New Year!  Hope everyone had some good Christmas/New Year adventures!
I've been out and about in the Lakes, Peaks and Cairngorms (via a quick trip to Brighton), all in 10 days!

Back in September I got a mysterious package through the door, inside I found a Haglofs wind jacket (shield comp Q hood) and Haglofs goretex jacket (scramble Q jacket) along with instructions to use and abuse. I looked out of the window, the sun was shining.....hmmm.

I took the wind jacket out on the fells in the hope of finding some blustery conditions, but it was completely by chance I found some. Out on a night ride across houndkirk moor I suddenly realised it was no longer summer and I was certainly not wearing enough clothing. Thankfully, tucked neatly into my cycling jersey pocket (test number one passed) was my bright pink shield comp! I was still a bit worried it might not be enough, at around 70g it feels like there's almost nothing there even when on, but the minute I put it on the wind felt completely blocked and I continued on for another hour and half :-). The fit feels equally good for biking reach and running which is good in my books, and it has a hood,something my other wind jackets have lacked.

By the time we left for the lakes just before Christmas there was no longer any lack of suitable test conditions! Me and Sally had a last minute change of heart looking at our planned route over Fairfield and opted for a lower level, but still very wet, loughrigg, silverhowe, loughrigg. Me and Wil abandoned our attempt at running over St Sunday Crag to spectate the ultra tour de helvellyn, opting for a 50min (instead of 2hr) run and a vantage point in the white lion...Arriving in Askham for the finish, we watched the best sprint finish after 38miles from Shelf and Kim, Kim just ducking under 6hrs for the race, awesome in some rather wild conditions.
A bit later on and Claire arrived, finishing her first running race of that distance, very impressive!
By the time we hit the peak district we hoped it might be a bit nicer...well, we could see the top of the hill at one point.... I took my new bright pink shoes (below) for their first outing. I chose a particularly muddy route so there'd be no puddle dodging, no matter how pretty they were to begin with. Me, Wil and Nic did a classic loop around kinder, up to the shooting cabin, Williams Clough, Kinder Downfall and back via 3 knolls. For a trail shoe I was pretty impressed, I could keep up on the descents (ok, so the others weren't going full tilt but heh) without danger of damaging my ankles or ending up on the floor. I've had other pairs of shoes that resemble a road shoe converted for off road and found that especially with my ridiculously mobile ankles, I manage both of the above very easily. So far I've found these new trail shoes good, low enough that they are good and stable with a close fit so I've got pretty good confidence in where my foot is/is going. I'll probably keep them for trail rather than fell in the most part though - at Wansfell race I did do a small bit of sledging instead of running down the hill, then again, so did Nic and he was wearing mudclaws!

Wansfell race is actually a bit mental, I forgot how far up it goes!! With 380m of climb in 2 miles, its a lungbuster and very easy to blow up on. I managed to make myself dizzy going up the hill but summited before falling over, which I promptly found was the best descending tactic as the grass was so steep and wet. It's been nearly 2 years since I last did this race and after so long travelling the previous 2 days I didn't feel fantastic. It came as a nice surprise to get a PB, by 1.5mins!!

Finally I took the scramble Q jacket out for its intended purpose - another blustery wet adventure around the peaks, from Ladybower over Win Hill and Hagg Farm and back. Both me and Helen were well equipped with our nice slick summer tyres on...we had fun, it was a bit like Mountain Mayhem slideyness but thankfully less sticky mud!


The jacket kept me toasty and dry and as you can see from the picture, it has now been at least a little bit abused. So,given the beautiful colours the jackets and shoes started in, the question I can hear on everyone's lips, 'are they still bright and shiney?'. Well, the answer is pretty much yes. Even after running through Kinder's finest peat bog the shoes came up bright pink, now with added darker pink highlights. On to the next test at the Open 5 on Sunday :-)
Posted by Lucy at 13:39 No comments: