Something a bit different....

Ask anyone what I'm good at when it comes to running and they'll probably say 'long, rough terrain, rocky races with a huge amount of climb', or something along those lines.
So it was a bit of an odd decision for me to decide I wanted to run a fast trail race, even if it is 32miles long.

Back in October/November I decided to see if I could run faster, so started to do a few interval sessions and quickly found my speed increased. Before I knew it, 12 fast miles seemed easy and I was floating along. Brilliant. So what should I do with this....

I'd done the Haworth hobble (32miles, 4400ft ascent) in 2011 and decided to see how fast I could run that. My previous attempt was 5hr 36, so I set myself an ambitious target of 5hrs (last time I'd prepared really well with the HPM and an open 5 the previous weekend and a wedding the afternoon/evening before).

The route runs along the trails from Haworth, past Walshaw dean, widdop and hurstwood reservoirs, out to the long causeway where the wind turbines act as a marker that you're almost at the road. From here its an undulating descent into Todmorden and straight out the other side, up to Mankinholes and Stoodley Pike, before losing all the height again to Hebden Bridge down a very steep bit of tarmac. Out of Hebden Bridge, they clearly don't think there's enough climb in this route, as you head up to Heptonstall before dropping back into the valley to climb back up (up up for 3.5miles) and back over to Haworth.

When I planned this in November I was already running 12-15miles at pace comfortably and planned to increase this up to the 30 mark over the coming 3months. This didn't entirely go to plan, firstly the students I teach gave me a stomach bug which took out a week or so's training, then I got the lurgy from them again at Christmas. This time it took me out for for around 4weeks....so in the middle of January I jumped back into running without the nice build up, full recce of the route, leg 2 of the BG and the Keswick 3 peaks all within a week got me some miles in. Not too surprisingly I didn't feel as 'floaty' anymore.

Wadsworth trog served as a good marker as to how things were going at the start of Feb. Run over a similar area but with more bog and hills, it didn't go too badly but I certainly wasn't running as fast as I had been before Xmas and I had a few doubts about my fitness for more than 20 miles. Not much to do about it now other than a few more miles and a bit more speed work in the 4 weeks to the race.


This year, Haworth Hobble also served as the selection race for the GB team for the world ultra trail championships, so the field was a bit more packed than normal. My plan was to see just how close I could get to those at the front, so as we set off I decided to go with them and see what pace they hit. It was fast but not impossible....then I noticed the women's field had started to overtake Rob and Andrew Jebb, at which point I decided to be more sensible, there was no way on earth I was finishing ahead of them so why start there. So I settled into 5th and then 6th position around the 1.5mile mark as we headed for the trails.

What I remembered as a fast dry course certainly wasn't today, it was a bit soggy and quickly christened my new shoes. The trails at the start quickly turn a little bit rocky and technical which suits me well. I don't seem to slow down on the slippy rockier paths (my friend Anna even suggested I get faster, but I'm not sure about this...) so this played to my advantage as we headed up and over to the first res. I provided some entertainment on the descent as I got a corner slightly wrong on the wet flag stones and careered off into a ditch to avoid hitting the deck. Out the other side of the res and the pattern for the day started to emerge, on the road I was clearly running slightly slower than those around me but on the trails, slightly faster. Thus started some back and forth with Samantha Amand, who had caught me as we hit the trails, I'd pulled away from on the flags and now she came steaming past on the road!

Heading for the wind turbines and the trail flattened out, I was pleased to see I was keeping a good pace, through the 14miles mark in under 2hrs (probably a new PB for 2hrs there) and soon I was heading for Todmorden. For some reason the trail across and down to Todmorden is not my favourite but I soon popped out the bottom, in the right place for the first time ever thanks to the guys I was running with and I was on to my favourite bit of the race. Probably the only part of the race that's truly fell running (as I've run it plenty of times before in noonstone fell race), I really enjoyed the climb to Mankinholes and Stoodley Pike, eating as I headed for the summit and conserving some energy for the climb to Heptonstall that was still to come. 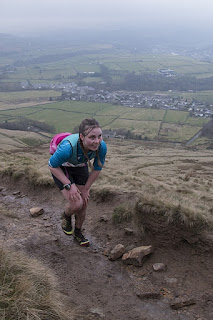 Running down to Hebden Bridge I saw Bashir running up the road and must have still been running alright as he commented on my relaxed gait. Unfortunately the race from here on in requires you to be an actual runnner, not reliant on slippy rocks and fell running to get you by.
As we hit Hebden Bridge, Sabs caught me and ran past, along with two other ladies (Samantha passing by again I think).  There wasn't a lot I could do other than run harder than I might have chosen to up to Heptonstall and we hit the bridge in the bottom of the valley together as I knew where we were going ;-). Then came the 3.5miles of uphill runnable trail. My worries about the bit after 20miles started to be real, what was I doing trying to run these last 8miles? We were on Sab's terrain now and I just tried not to be gapped too much. As we hit the road part of the climb I picked up (this is steeper) and I suspect all of the damage was done by this point as I managed to get my legs to turn over better heading over the moor and up the road to finish off the climbing.

I'd entertained the thought that sub 5hrs was on around Stoodley Pike, but it snook over to 5hrs 9mins by the end and I finished 10th lady.  I'm pleased with this as I'm not surprised my ability to keep a fast pace going on smooth trails faultered towards the end (as I said at the beginnning, nobody would say this is my forte even before I've run 25miles). I certainly set new PBs for distance run in 2hrs and 3hrs (and probably 4 and 5hrs too).

Sabs asked at the end whether I wondered what would have happened if I'd set off slower with her. Looking at the GPS traces, the answer is no. I was never more than 4mins ahead and this was mainly thanks to the slippy flagstones in the first 5miles. From there on, any fell type terrain I tended to run slightly faster and any smooth trail Sabs ran slightly faster until there was enough smooth trail to reverse our positions. I suspect setting off slower would have meant a slower finish outside the top 10 as I would have relied on my abilities (or lack of) to run on smooth trail at the end, rather than my abilities to run over wet rocks.

One thing I'm particularly happy about is that I finally dug deep and raced hard, not backing off when things started to hurt. This is something I haven't found myself doing for some time (even with some good results in the last couple of years). Hopefully this will set me up nicely for some long fell races this year with my race head well and truly on.